Environment factors are considered an important driver of global migratory flows, as people are displaced or tend to migrate to survive natural disasters and to adapt to changes in their environment. It is expected that the magnitude of these movements, both internal and international, will increase due to climate change, the higher incidence of natural disasters and environmental degradation.

The relationship between migration, environment and climate change is complex and multidirectional: migratory flows can, in turn, have negative and positive effects on the coping capacity and the environment of the areas of origin and destination. In addition, environmental factors rarely act as the sole driver of migration. On the contrary, especially in processes of slow degradation of the environment, environmental factors are combined with economic, social, and political processes, both at the level of the whole community as well as the family and the individual, to explain the decision to migrate or stay in a certain place.

According to IOM, “Environmental migrants are persons or groups of persons who, predominantly for reasons of sudden or progressive changes in the environment that adversely affect their lives or living conditions, are obliged to leave their habitual homes, or choose to do so, either temporarily or permanently, and who move within their country or abroad” (IOM, 2011, Glossary on Migration, 2nd Edition).

Migrations and displacement are traditionally considered only as a negative consequence of the lack of adaptation of communities to disasters and climate change processes. However, it is also important to emphasize that migration often represents a fundamental strategy of adaptation or survival of families to processes of environmental degradation. In this framework, it is important to consider migration movements through an adaptation to climate change lens.

IOM has developed a broad scope of work on the relationship between migration, the environment and climate change, which includes research activities, policy guidance, cooperation with entities active in the field and implementation of programmes. IOM has established collaboration mechanisms with institutions such as the United Nations Framework Convention on Climate Change, the Platform on Disaster Displacement, the United Nations Convention to Combat Desertification as well as many international and national institutions and civil society organizations.

IOM Statement on the Los Angeles Declaration on Migration and Protection 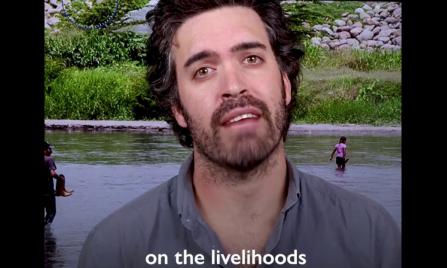 The Dry Corridor in Central America