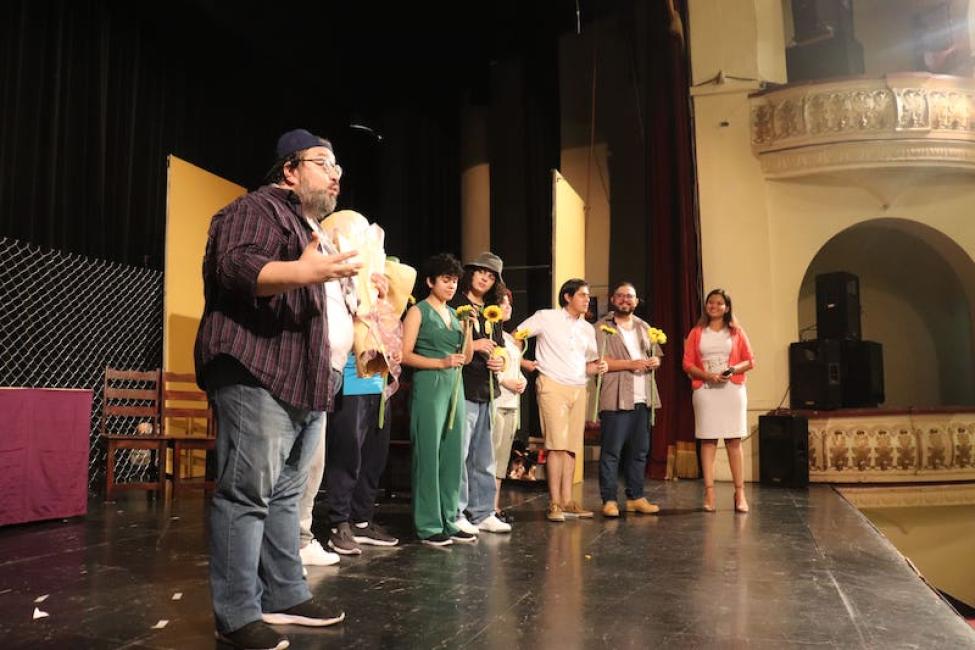 Mario Jesús leaves home because of his father's rejection. His sexual orientation creates tensions in his family. Thereafter, the difficulties he faces force him to leave Honduras through a coyote and face many of the risks of irregular migration. Mario Jesus' story is depicted in "Behind the Barrier", a forum theater play conceived as part of IOM's "Think twice" communication for development campaign. This forum theater play has reached more than 1,500 people since its premiere in August 2022, and has its tenth performance today, November 22, 2022.

Talking about migration is complex, especially when migration is part of family histories in regions like Central America but it is key to process emotions and reflect on the multiple reasons and ways in which people are leaving their country. For this reason, the dynamic of the performances involves a forum immediately after the staging ends. At this moment, the director explains to the audience how forum theater seeks to transform the spectator into an actor or actress to help resolve the main conflict of the play.

In this way, the audience becomes part of the scene and with an open microphone, the spectators propose different scenarios to make the character's migratory story different. The result of this exercise is fascinating, the audience tests their proposal to solve the situation that Mario Jesús is living, goes on stage and acts together with the cast of young people.

This dynamic allows the audience to assimilate the protagonist's story and generate a deep and honest conversation about the complexity of factors, from the global to the individual, that weave migration stories. The audience then reflects together, through the dramatic arts and discusses key questions: What should happen to reduce irregular migration? How could migration stories, like Mario Jesus', end differently? The director shares that: "Through this play, without foreseeing it, we have woven a kind of network for people who are still hurting from migration.

The play's script was written as a participatory process with young people from Honduras who shaped their close experiences of migration under the coordination of José Luis Recinos, director of the National School of Dramatic Art (ENAD). Daniel Barahona, the young man who plays the father of the family in the play, comments on how this process marked his life: "Art changed me. It is a door that opens for young people to learn about important issues".

"For the IOM, hand in hand with the campaign “Think Twice”, it is essential to empower youth to identify possible risks associated with irregular migration and at the same time show them ways to obtain reliable information linked to and opportunities for development in their communities," said Likza Salazar, head of the IOM Honduras Office.

This effort has been made possible thanks to the National School of Dramatic Art (ENAD) and the Secretariat of Cultures, Arts and Heritage of the Peoples of Honduras, IOM Honduras and the youth ambassadors of the "Think Twice" campaign. This activity, as part of the communication for development campaign, contributes to the objectives of the Global Compact on Migration: 3, 10 and 17, in the framework of SDG 10.7, and has been implemented in the framework of the IOM Regional Program on Migration, with the support of the Bureau of Population, Refugees and Migrants (PRM), of the United States Department of State of the United States of America.